President Adam Sweet talks about plans for a Spring 2021 concert in Providence, RI and Western, MA
at September 26, 2020 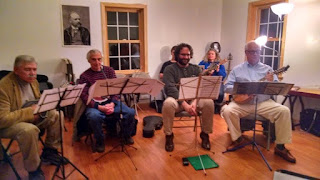 Even with the coronavirus pandemic, we still find time to get together to play music. If you would like to safely join us, put on a mask, get your music stand and light and head over to our new (temporary) rehearsal spot! We'd love to have you. Before you go, contact us so we can send you the sheet music and give you the address.

Mandolin New England, Where Are We Now? 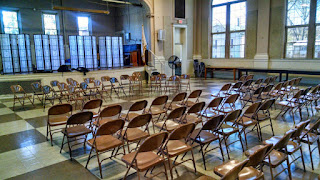 Waiting for the concert
Mandolin New England's concert in May was cancelled due to the Coronavirus Pandemic.  We are planning a Spring 2021 concert which will be held in two places, Providence RI and Granby MA.  The date is tentative because of the situation, but we are working currently on the program material so that once the date is decided, we will be ready to put the finishing touches on it.
at September 26, 2020

Adam Sweet, music director and founder of Mandolin New England, which will perform at town hall auditorium in the group's first concert on Saturday, Jan. 17 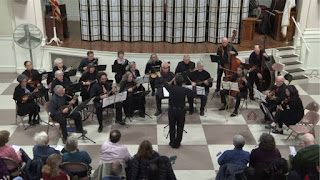 SOUTH HADLEY - The Mandolin Orchestra, formed a year ago performs their first concert Saturday night alongside the veteran mandolin ensemble, L'Esperance, and Northamption-based Mando Paradiso, that features music from the Baroque to the contemporary classical music period.

The South Hadley-based group, conducted by Adam R. Sweet, music director and founder of the chamber group, has been rehearsing each week since August in preparation for their maiden concert.

"I'm excited it's going to be fun," Sweet said.

On the program is Johann Sebastian Bach's Brandenburg Concerto No. 3.

Though the early 18th century masterpiece is scored for a traditional chamber orchestra of three violins, three violas, three cellos, and basso continuo, Sweet's orchestra, along with L'Esperance and Mando Paradiso, will perform it on mandolin.

"We are doing it all on mandolins. It sounds fantastic. It sounds like a harpsichord from heaven. It's just gorgeous, this rich tapestry of sound," Sweet said, adding: "Our musical connections throughout the region have led to a vision of a larger 'Mandolin New England' venture that links our orchestra with other mandolin ensembles." ~ Josh Bell, L'Esperance

"Our South Hadley base makes us eager to play a role in the rise of the Falls," he said. "We're going to be working with the Falls committees to put out some classical concerts in the Falls and work with area composers to compose music with a South Hadley Falls theme." 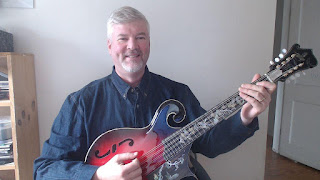 Mandolin New England President Adam Sweet 80F began studying and playing music at the age of four, when he started violin lessons. He continued to pursue music as a student at Hampshire College, and also studied animal behavior theory and psychology.

At Hampshire, Sweet met student musicians who frequently held jam sessions outside. He developed an interest in bluegrass and purchased his first mandolin. The mandolin is fingered the same way as a violin and he transitioned easily between the two instruments.

Sweet says the mandolin gave him "a sense of freedom" that he hadn't gotten from the violin. "I could take it anywhere with me," he says. He appreciates the mandolin's versatility, saying that it is "a very visual instrument" and easy for beginners to learn.

Although he has done some composing, Sweet mainly thinks of himself as a music teacher rather than a composer. He taught group music classes at the Northampton Community Music Center for twelve years, which is what got him interested in the idea of starting an orchestra.

In 2010, he was contacted by August Watters from the Berklee College of Music, who wanted Sweet to co-produce a concert of classic mandolin music. Unfortunately, the concert never happened, but the concept and preparation for it inspired Sweet to pursue the idea. He recently founded Mandolin New England, which welcomes mandolin players of all levels of experience. Sweet hopes to revive the tradition of the mandolin orchestra, which was more common in the United States at the beginning of the twentieth century. The orchestra now has a staff of volunteers, and features numerous musicians and composers. They had their first rehearsal in February and will have their first concert in September.

Sweet encourages aspiring mandolin players to find good teachers who know the instrument well. He also suggests that mandolin players should join jam groups. "Playing with others is the best way to learn," he says. Finally, he recommends going to as many concerts as possible and to listen to mandolin music frequently: "Surround yourself with it … Listen to it all the time."

Sweet is fascinated with the history of music and is interested in a variety of genres—including classical, Celtic, acoustic Americana, bluegrass, folk, and Middle Eastern music. As well as the violin and the mandolin, he also knows how to play the viola, guitar, bass, bouzouki, and erhu. He has played music all over the world—in Ireland, Belgium, Austria, Germany, Switzerland, South Korea, China, and Egypt. He teaches from his own studio in South Hadley, The Sweet Music Studio.

Mandolin New England is a classical mandolin orchestra that performs compositions from the Renaissance period up to the 20th Century and beyond, as well as modern, local compositions by area musicians and composers.  The Orchestra  meets severel times a year for a gathering where we rehearse, eat delicious food, play and perform.  These are mandolinists from all walks of life that come together to do what they love most, play beautiful music.

“It’s fun, it’s incredibly fun, it’s thrilling … It gets your blood moving … it’s not just nine adults sitting in a room staring at notes on a page, it’s nine adults present together, breathing and listening and playing and singing. It’s a very beautiful thing.”
If your ensemble would like to become a member of Mandolin New England, contact us.  You will be added to the mailing list and invited to attend open concerts and other events.
at September 26, 2020

Looking for Players, Rehearsals and Update

LOOKING FOR PLAYERS We are looking for players to join the orchestra!  If you live in Western New England or New York (CT, VT, Western NH,... 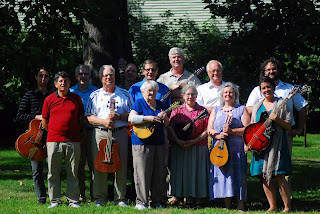 On mobile, this page is best viewed "as a website", especially if you would like to see the listed pages and links.

Adam Sweet
Adam Sweet is the President of Mandolin New England, a nonprofit mandolin orchestra. He teaches out of his home in Granby, MA USA where he lives with his wife and two sons. He's an avid farmer, growing apple trees, grapes, blueberries and raising chickens. There's nothing better than fresh eggs!